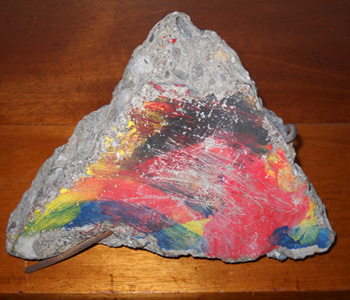 Shortly after the Berlin wall came down in 1989 I started teaching Integrated Foot Hand Ear Reflexology classes in Berlin, Germany. Many deep and richly rewarding experiences followed during the next 20 years of teaching in Central, Northern and Southern Germany. One such highlight came via the Berlin Wall. It still impacts my life almost 25 years later.

During the Beginning Foot Hand Ear Reflexology Workshop in as parsely yet tastefully appointed yoga studio in West Berlin, most of the students were from more affluent and free West Berlin. One student was from East Berlin, the part of divided Germany that for decades had been under totalitarian control, behind the Berlin Wall.There were visual and behavioral difference between students from West and East Berlin. West Berliners were like Reflexology students in any free country where I’ve taught;smiling, playful, obviously excited about learning. They also had brightness in their eye and vibrant skin tones. East Berliners seldom smiled, seemed withdrawn, subdued. The eyes seemed sullen, cautious, skin tones lacked color.

Part of my teaching style is to use approaches that empower students to explore new ways of healing and helping themselves, and others. During one such skill I asked students to do, everyone from West Berlin did so right away, but not the student from East Berlin. My associate and translator explained to me that people who had been under totalitarian rule behind the Berlin Wall for so many years, were afraid to take risks, afraid to make mistakes. Stepping out of line / doing something wrong,under the East Berlin Regime could get someone in serious trouble. With a gentle voice, I encouraged the student to give it a try, assured and reassured her that anything she did would be alright, that it was desirable to try new approaches. So she did. I was pleased for her, but gave it little more thought, as there was the entire class to focus on for two full days of instruction.

What this short story is about happened at the very end of the hands-on workshop. After reviewing what knowledge and skills had been learned during the two days, and giving everyone their Certificates of Attendance, two of the students, one from West Berlin the other from East Berlin, stood up, came to where I was, started speaking,talking to the class and to me, then quietly reached into a bag they were carrying.

I’m rarely at a loss for words, but the symbolism of what they gave me struck deep, and still does to this day almost 25 years later. Turns out, after class the previous day, the two students, one from the West the other from the East, went to get the gift, and in class gave me a rather large piece of the Berlin Wall.

I was profoundly moved that this gift came from the free and the newly free. Not only was this a symbol of an entire people being prevented from freedom to risk, to grow, to thrive, but also, a symbol of the walls all of us have in our lives, be they external obstacles or personal walls within ourselves.

To this day, when facing new challenges or any of my own personal inner walls, I look over at this gift, the gift of the Berlin Wall, and am reminded that, walls can and do come down.

May you dear reader, be able to have the courage and confidence to face your own walls and know that with persistence, they indeed, can come down.